New sports technology: 4 of our favorites

Most aspects of our lives are now linked to the internet and electronics. Food delivery, social networks, shopping, entertainment, communication.. You name it. Sports are no exception to the rule. In fact, new sports technology might just be one of the most dynamic market as possibilities are pushed further everyday by both developers and athletes.

Our OpenSponsorship team is made of athletes as well as huge sports fans. Which is one of the reasons we love those new sports technology products so much. These products make athletes safer, help them reach their peak and improve competitiveness levels in every sports. We love being the connecting point between these great products/brands and our awesome OpenSponsorship athletes!

SportTechie has been an invaluable source of information for this article.

4 brands caught our eye through their amazing new sports technology:

I/ AfterDark Technologies: LED jerseys and ball for flag football 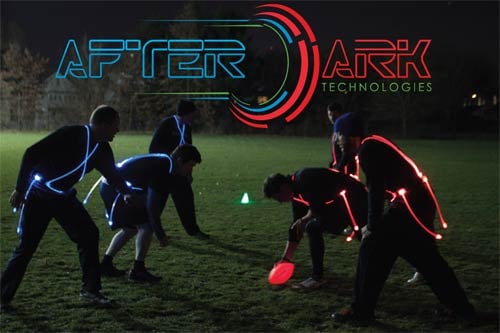 These awesome jerseys and balls are definitely going to revolutionize flag football. Indeed, these kits will allow us to enjoy our favorite sport at any time of the day. No more cancelling a game because of the hour! Not only do these amazing kits let you play in the dark, these also include some useful features such as alternating colors on the QB's jersey, representing the rush count down. Also, its optic fiber flags to never miss your "tackle"!

Our idea for a campaign is to have a major league player from the NFL, NBA or NHL, to take a video playing some flag football with their friends, family, teammates or have kids play at one of their football camps! The NFL player could be Michael Vick who is now playing in the AFFL: American Flag Football League or Eric Berry (ballhawk safety and 2016 all-pro). Another idea could be finding an athlete from a Niche sport like Rowing, Skiing or Triathlon, who loves football, to test the product out, thus showing the appeal of the fastest growing sport to athletes (in college) to all.

The MVP is the future of american football and rugby training. Dummies have been used for decades in contact sports training as it reduces unnecessary injuries during practice. However, a moving target makes training more realistic, thus prepares athletes better to in-game action. This is one of the reasons MVP has been developed! The MVP also has been tested for tactical training: now preparing shooters better than ever! Our idea for MVP is to make a campaign is to have a player with a reputation for his tackling such as Clay Matthews (NFL linebacker) or Fulgence Ouedraogo (Flanker, France national team 7s and Union), record and post a 30 seconds video trying the dummy out in different game like settings.

Vision is key to any sport, it is even more important for activities during which you are highly exposed to environment changes and sunlight such as cycling. CTRL Eyewear released a pair of glasses changing tint within 0.1sec depending on your environment's light. Finally, people are safer during situations such as: being exposed suddenly to very bright light. Or on the contrary, riding through a dark zone right after having the sun in your face.

Our idea for a campaign is for a skier/snowboarder or a cyclist such as Travis Rice or Cam Zink to record a close angle video while riding down a mountain to show how quickly and accurately the glasses change tint (from the sunny top to a dark valley for example).

FlyPro revolutionizes the drone industry for athletes and sports enthusiasts with its smartwatch controlled drones. No more worrying about your filming: just focus on your activity! This is like having a photographer following you around. It makes it easier than ever to record your best feats no matter where you are and if you are alone! This helps you keeping your followers up to date and content going at all times.
Our idea for a campaign is to have one or more snow or water sports athletes such as Gus Kenworthy or Kelia Moniz taking the drone for a ride and post curated highlights of it on their social media!

If you are a brand sign up for free here to access our roster of 2600+ athletes, teams and events.