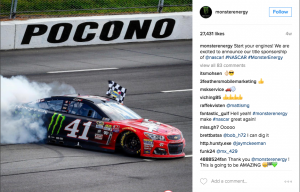 Monster hits the clutch and puts its NASCAR Cup Series sponsorship in gear.

Word is out! Although there is no confirmed price tag, Monster Beverage Corp. has purchased the sponsorship title rights to the NASCAR Cup Series. Monster has become just the third sponsor of the NASCAR Cup Series following RJ Reynolds, as well as most recently, Sprint.

The sponsorship deal between the two powerhouse companies is rumored to be valued at around $20 million a year. The deal is said to be a multi-year agreement that has options for extension. This may seem like a pretty penny, however, if the numbers are accurate, NASCAR signed a deal worth about 40% of their previous sponsorship deal. That can’t be a good sign for the NASCAR Cup Series right?

Not the case. Even though NASCAR executives will be cashing a more modest check from Monster Energy, it’s a strategic play for the motorsport company to reach a new demographic. "Monster Energy is a brand built on excitement and enthusiasm, qualities that align with NASCAR," said Brian France, NASCAR Chairman and CEO. NASCAR for the last 10 years has seen dwindling attendance and viewing volumes. On the flip side, the company continues to remain THE most lucrative sport in America. NASCAR pulls in roughly $3 billion in sponsorship monies, which is 2 times the amount raked in by runner up, the NFL. Sorry Mr. Goodell!!

Why it will work:

Look out Red Bull; Monster is working on a motorsport monopoly, all thanks to smart sport sponsorship.